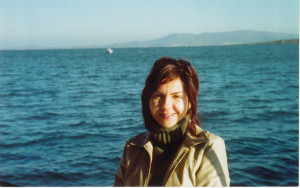 Hello and thank you for exploring Transcending Boundaries!

I am a historian of the Islamic Middle East and my primary area of expertise is social, economic and legal history of the Ottoman Empire in the early modern era. At St. Mary’s College, I teach various courses in the cross-disciplinary areas of Asian Studies, Women Gender and Sexuality Studies, History and Religious Studies. I use an integrated and comparative approach in my classes, with an emphasis on cross-cultural encounters between the Muslim world, Europe and the Mediterranean. I am the author of Selim III, social control and policing in Istanbul at the end of the eighteenth century: between crisis and order and I have published a number of book chapters on the artisans and population of Ottoman Istanbul. I have also worked extensively in the Ottoman archives and taught Ottoman language and paleography at the University of Chicago and Georgetown University.  My latest project is on urban space and mobility with a focus on the surveillance of “dangerous classes” of Ottoman and European cities. Selim III, Social Control, and Policing in Istanbul at the end of the eighteenth century

In Selim III, Social Order and Policing in Istanbul at the End of the Eighteenth Century (Leiden: Brill, 2014) Başaran examines Sultan Selim III’s social control and surveillance measures. Drawing mainly from a set of inspection registers and censuses from the 1790s, as well as the Sharia court records she paints a colorful picture of the city’s residents and artisans. She argues that the period constitutes the beginnings of large-scale population control and crisis management and urges us to think about the Ottoman Empire as a polity that was increasingly becoming a “statistical” state, along with its contemporaries in Europe, and to go beyond mechanistic models of borrowing that focus primarily on military reform and European influence in our discussions of Ottoman reform and “modernity”.